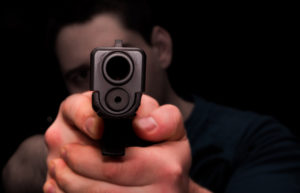 Fear bound her tighter than the rope encircling her wrists and ankles; like a python’s coils it constricted her chest, and made each breath difficult. Her body was a constant reminder she was not trapped in some horrible dream, her cheeks pinched by the tape across her mouth, the inside of her throat dry and sore. … And if that was not reminder enough, there was the gunman right in front of her, all too real. Every time his eyes swept over her, she felt naked under his scrutiny. If only she could tunnel into her mind and hide in a snug burrow of her creation. But her discomfort fixed her in reality.

At first, she kept her head up, eyes staring straight ahead, the only show of defiance possible, but it forced her to look into the dark tunnel of an automatic weapon barrel which frightened her even more. She redirected her gaze downward, her view limited to her legs and feet, the roped extremities of her family who sat on either side of her and the floor. …Time inched along at a sloth’s pace. In the absence of conversation, sounds amplified, the whir of the fan above her head, the distant clap, clap of leather sandals against stone, the squeal of wooden furniture being dragged across the floor, cupboard doors opening and closing, and the occasional bark of an order to the men scavenging in the other rooms of the house.

She considered their situation. Escape was impossible and the likelihood of rescue seemed remote. The walls that surrounded the house for protection and privacy provided the same advantages to the criminals who had breached them. In her helplessness, the only thing she could do was pray to Allah to keep them safe, each silent prayer slipping between her lips like prayer beads through her fingers. But, her petitions failed to push away the thought that fate had caught up with her and this was how her life would end.

As this sense of doom held her in its grasp and all hope fled, she struggled to conjure up pleasant memories to provide some comfort and instead was ambushed by her regrets. If only she could go back to the beginning, back to when anything was possible, back before her missteps had sacrificed the life she’d dreamed of and distanced people she loved.