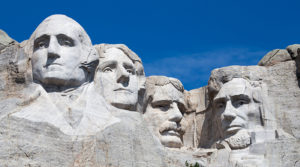 When Donald Trump said he was serious about getting his face carved into Mt. Rushmore, I figured we’d better see that famous monument while it was still how we imagined it. So my wife and I hit the road from Madison, Wisconsin, for the 800-mile drive to Keystone, South Dakota, to the gleaming granite faces of four past presidents—George Washington, Thomas Jefferson, Theodore Roosevelt, and Abraham Lincoln.

We split the distance in half, spending Friday night in Sioux Falls and continuing on in the morning. The forecast was perfect— glorious sunshine, and temperatures to reach into the 50s.

Neglecting to consider the Mountain Time Zone, we reached Rapid City an hour earlier than expected. It was two p.m., and Mt. Rushmore, just 30 minutes away, closed at five. The temperature was now 55, the sky postcard blue, so we dropped our bags at our motel and headed south on Route 16—Mt. Rushmore Road—twisting upward through the pine forests and granite cliffs of the Black Hills. Keystone (pop. 370), the official home of Mt. Rushmore, was disappointing, a kitschy cowboy town, but we soon left it behind.

Next came our first tantalizing glimpse of Washington’s head above the pines. Then we pulled into the grounds. The parking facility, with a smattering of cars from dozens of states and Canada, had been cleared of overnight snow. That snow, in turn, had closed the Presidential Trail that leads from the Grand View Terrace to the granite escarpment beneath the carved faces. But it didn’t matter—the presidents were in full view along the Avenue of Flags between the parking area and the monument, and with the proud emblems of each state snapping in the breeze, we walked the avenue among a mélange of accents and languages.

The overnight snow had also closed the Greek-style amphitheater beneath the terrace, but again, it didn’t matter—Washington, Jefferson, Roosevelt, and Lincoln now loomed above us in startling 3-D.

While my wife wandered off to take photographs, I lifted my binoculars and made an amusing discovery. A small pine had rooted itself in the granite detritus below the chin of Roosevelt. According to Rushmore’s information director, there’s no more space for additional carving on the monument, so Donald Trump’s face will never appear there. But I think that, one day, that rogue pine will tickle Teddy’s nose.

Claude Clayton Smith is the author of eight books, plus a variety of short fiction, poetry, essays, and plays, and blogger from Madison, Wisconsin.