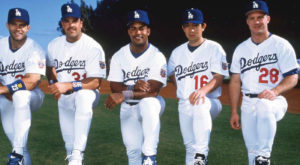 I’m a little embarrassed to say it, I’m a Dodgers fan. I grew up in NYC and loved my Yankees as a kid. I hated the Dodgers so much in those days that, as a 9 year old, I booed a blind retired Dodger as he took a bow with his white cane at an old timer’s game. Equal opportunity indeed. When I transplanted to Los Angeles in 1965, I was hooked by everything West Coast and that included the Dodgers, much to my own surprise.

But one of my favorite moments as a Dodger fan came during a heartbreaking loss to the Philadelphia Phillies. Back in the 1990’s, the Dodgers were beating up the Phillies by a score of 8-0 in the second inning. Vin Scully was announcing the game and shining his special light on it. At this point, I need to admit that some of the details of the game I’m about to describe may not be entirely accurate because, at the time, I didn’t recognize their importance. Essentially, it goes like this: Jim Fregosi was managing the Phillies that day and, despite the lop-sided score, he remained steady and applied his strategies with care and focus. It was, after all, only the second inning. His boys began chipping away at the Dodger’s lead and, by the fourth inning, it was 8-3. That’s still a pretty big mountain to climb in major league baseball but Fregosi remained so meticulous as he strategized that Scully said, “Fregosi’s managing this as though he’s got a chance to win it.” The Phillies kept coming on, scoring a run here and a run there and by the eighth inning it was 8-7. Sure enough, they tied us in the ninth and won it in the eleventh.

Now Vin Scully wasn’t perfect. In fact, he made the same grammatical error night after night when he’d confuse “less” with “fewer” but his greatness was displayed by the indescribable warmth of his voice, his humility, his grace of character, his sense of perspective, his love for and knowledge of the game. Scully could point out the undeniable parallels when life imitates the action of the field. And the guy could read lips.

We all know what it’s like to start a day badly and how tempting it is to say, “well this day is already in the dumpster.” And on days when we feel like that, we can remember Scully’s words when Fregosi’s Phillies were down 8-3 in the third inning: “he’s managing like he’s got a chance to win this.” And that’s just one more reason Vin Scully is in the Hall of Fame.

Rick Smith is a musician and harp player (that’s a harmonica folks) from Helendale, California.