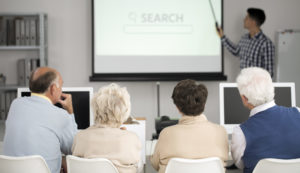 I signed up for an internet class to learn to search the web for my German grandmother Anna Fricke’s immigrant history in 1904 Brooklyn. A class for seniors. Some of the students use a cane, one uses a walker, there are stiff-leg breaks, pee breaks, and initially a few cranky episodes involving “You’re in my seat,” which had to be handled by teacher.

I’m out of my comfort zone, and love it. Not knowing the terms – server vs. search engine, OS, lists of apps, links, spiders, deep web, why web pages refuse to appear, and etc.

It’s an early morning class. I leave time for bus issues. This morning a crazy lady, up unusually early and cruising on her meds, says there are “devils” on the bus pressing on our heads. I definitely feel it.

At the College before start of class I talk with the two women who sit across from me on the computer dock. One worked at the Presidio at a military job for thirty years. We discuss the California men on the train in Europe who foiled a Euro-Rail terrorist attack. Terrorism we agree, as Nazism was before it, is the latest big popular religion, a strange one since it desires to wipe out all types of Western social relations known since the 9th century and it’s dedicated to doing it using 21st century Western-developed technology. The temple ritual developed by their high priests is building an explosive device, strapping it on, taking opioid drugs and blowing up Nature’s temple.

The woman whose outlook was forged in the Presidio says, “The only answer is that nowadays everybody needs to carry a gun.”

How, I wonder, would that go in our class of sporadically irritable seniors. Shootout at the Internet Corral? Walking slow and menacingly down the long ecru-colored hallway towards one another, the aging Gary Cooper lookalike takes on the side-burned man who always wears a cowboy hat and boots.

One day the instructor tells me that sometimes at her age she wonders about doing her art, Why bother? Is it more important to continue to produce paintings, or to enjoy life’s distractions?

One task of the internet that might eventually prove mindful would be to give all artists the same quality of exposure – and let the future decide. It might be a small way computer technology could partially redeem its soul from intruding, selling, pushing, and pulling naïve minds to do as Hal wants. And, just maybe, in a couple of months, I’ll be able to find my grandma in 1904 Brooklyn, where she fled after having had an illegitimate baby at twenty-five in Rotenburg Germany.

Penny Skillman’s book of essays, “Beats, Hipsters, and California Cool,” can be found on Amazon Kindle. She’s published in many newspapers and journals. Copyright 2019 by Penny Skillman.