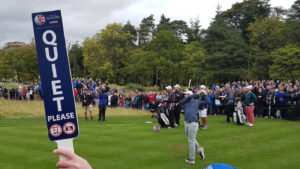 Retirement reduced my exposure to annoying situations, but it’s hard to avoid them completely. I recently played golf with a woman who announced she was extremely sensitive to sounds. She had rabbit ears and could hear even the tiniest whisper, requiring absolute silence when it was her turn to play. Even the rustling of a potato chip bag was terribly disturbing to her.

I got paired with her again a few weeks later, and she got into a snit about scoring. Rules for the women’s golf club events are rather persnickety. We all keep each other’s score, and you have to capture that information at the end of each hole played.

Around the fourth hole, she got a little huffy about our process for swapping scores and announced her demands for how it would be done going forward.

Good thing I spent my career learning “advanced” communication skills to get through challenging scenarios without injury or lawsuits. Please select the best response:

I chose D, haunted by the voice from the ethics videos we used to watch, “That is not your best choice.” Still, shit like this goes on in my head all the time, but I’ve learned to suppress it. Even on the golf course, I allow myself to be bossed around because it’s easier than conflict.

When we got to the next hole, she said, “Did you just ask me who died and left me in charge?” I said, yes, I did. She never spoke another word to me.

I hope I wasn’t too much of a jerk, and I hope I’m not put to the test again any time soon. However, it’s kind of interesting how it turned out. I shot my best score ever. What’s up with that?