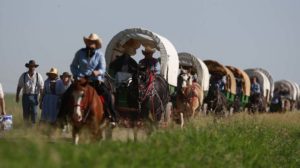 When people move to a new state it’s typically for a new job. But baby boomers are retiring and they don’t care about jobs (unless they have to work forever, but we’ll come back to that). So where are boomers moving? That’s the question that United Van Lines asks every year, and this year baby boomers are confounding the typical migration pattern.

So if boomers are not heading for Florida, where are they going? In order, here’s the top ten list of states: Vermont, Oregon, Idaho, Nevada, South Dakota, Washington, South Carolina, North Carolina, Colorado and Alabama.

And where are they moving from? New Jersey, New York, Connecticut and Massachusetts top the list. It’s interesting to note however, that the largest exodus due to finding jobs elsewhere was the South. The number one reason to move is still for a new job, followed by one in five families who chose to move in 2017 to be closer to family. In third spot was retirement.

More fun facts: The average person moves 5 times in their lifetime. It takes on average 182 days before you unpack the last box from the move.

Now to get back to who is not moving. There is no flight for boomers who find themselves still on the job, not by choice but of necessity. There’s no escape to a warm clime for those who are holding on to the same job in order to try and save enough for a decent retirement. Sorry to end on that sad note, but we need to recognize that many of our fellow boomers won’t be counted in next year’s United Van Lines survey, or the year after that. No flight. More like fight. To survive in retirement on Social Security alone. The big reckoning is coming for them and for all of us who will need to help them age in place with some dignity.