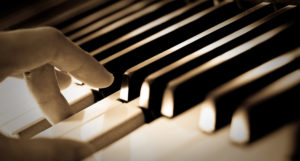 For my piano lesson, I follow an eight-year-old girl and her brother, who is twelve. Their older sister, tattoos up and down her arms, waits to drive them home when the lesson is finished. At least I thought she was their sister. But, no, she’s their mother. They’re all children, from my viewpoint. And what am I doing there, a seventy-something woman waiting, books in hand, to sit at the teacher’s piano for a half hour and hit the all the wrong notes?

Fair question. It was one of my not-so-smart ideas a few months ago. I read that learning a new language or playing music are two ways to delay dementia. I could never sing, was told I was tone deaf and would never be able to carry a tune, and couldn’t read music. Seemed to me that this was just the challenge I needed to keep my brain humming. Whether or not it’s working, I couldn’t tell you. But I have learned to read the notes and I found out I’m not tone deaf because I can actually tell when I hit a wrong note. I’ve also learned that there’s a bunch of other things besides the notes that you have to know before you can play very much.

I hit the same wrong notes over and over so I fear I may have waited too long to start the project – beginning dementia may already be taking its toll. But let’s not dwell on that. There is something else I learned from this adventure and that is what it feels like to have to do something you really don’t like, over and over, every day. This caused me to call my oldest son and apologize. Between the ages of eight and ten he used to sit at the piano daily and practice with an alarm clock set for twenty minutes. When that bell rang he stopped, mid-song if necessary. He’s fifty-one now. “I’m sorry,” I said. “I had no idea what that must have felt like.” A smug chuckle was his response. Over the phone, alas, so I couldn’t see his face. But I can imagine. How often does your mother admit to the error of her ways decades after the fact?

Four months into this I’m still trying. My practice sessions are shorter than twenty minutes. No alarm clock necessary. My back starts to hurt after about ten minutes so I quit when I feel the first jab of pain. Even in the middle of a song.