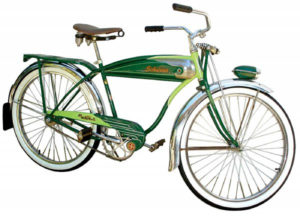 My first bicycle was a clunky green thing with a heavy frame and fat tires that were always low on air. The pedals clanked against the chain guard as they rotated and it shook and rattled whenever I picked up even the slightest bit of speed. It had no gears, no style, no anything. The only good thing about it was that when I clothes pinned cards to the over-sized tires, it made a loud and satisfying motorcycle sound. That, and the fact I never-ever not even once had to worry about someone stealing it.

With some fairly rare and spectacular exceptions, I was not a bad kid growing up, and I could never figure out what I had done to my parents to deserve this big, green monster of a bike.

I eventually did get the bike I deserved, though. It was a hand me down from my brother after he moved on to four-wheeled kinds of transportation. It was a sky blue Schwinn that had a sleek and graceful body, razor thin tires and three gears that clicked satisfyingly as they moved through their progressions. Front and rear hand brakes and fiery red tassels dangling from the handle bars completed the pictures. As soon as I jumped on it and glided into the neighborhood, I knew that it was the bike I was born to ride.

It never occurred to my ten year-old mind to name my bike. If I had, though, I would have christened it Freedom, or, better yet, Deliverance because that’s exactly what it did for me. It liberated me from the cloistered walls of my tiny bungalow, delivered me from its cookie-cutter neighborhood. On my bike I sailed off to the grassy baseball fields in Robert’s Park, or the dark, scary labyrinth of tunnels at Robbers’ Cave. I pedaled over the railroad tracks that bordered the city to catch crayfish or net one of the huge cat fish that lingered at the murky bottom of the salt flats south of town.

Bicycle riding was more than mere transportation. It opened an enormous eye in my mind, expanded the way I witnessed and engaged with the world. I pedaled into the world way back then, and I’ve been pedaling ever since.

Scott Peterson was an educator in Mattawan, Michigan. He also taught writing classes at Western Michigan University and was a teacher-teacher-consultant for the National Writing Project.