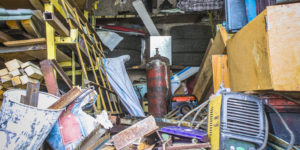 The subject of hoarding can never be too far from your consciousness— after all, baby boomers have been collecting stuff since the 60s. For all I know, you’re still wearing it all too.

But now it’s time to let go. Stop hoarding and start redistributing. To help you with your hoarding compulsion, you can watch some of the TV shows that are still running or go with Marie Kondo “does it spark joy” method.

What does it say about us that there are TV shows devoted to hoarders? There’s even a Clutterers Anonymous organization plying the 12 step waters to find their way to recovery. Twelve steps seems like too many if you’re trying to reduce the clutter in your life. What about three steps? 1) Admit you’ve been making a mess of your home. 2) Get rid of all the crap you’ve been hoarding. 3) Apologize to anyone you’ve ever allowed/forced to be in your home. There—that was easy.

The International OCD Foundation (you read that right) even has a Hoarding Center. That sounds a little obsessive, but they would know more about that than me. You can go to the Hoarding In the News section and read about how too much “stuff” can cause grief.

Once I came across a Holmes on Holmes TV episode (make it right Mike) where contractor Mike Holmes was flabbergasted to find a couple who had so much crap in their home that the heating and ventilation system couldn’t work properly (the vents were all blocked!!!). It just got away from them and then snowballed to the point that they didn’t know where to start—so they didn’t. If Mike had not come along, they would probably be dead now—carbon dioxide poisoning. He and his crew carted off all the family’s junk in a convoy of four trucks.

Boomers, it’s time to get proactive. Learn to love the minimalist décor. Dump it on your kids, sell it on eBay or leave it in the street, but you’ve got to get rid of your excess stuff before the reality show producers come calling and you really make a fool out of yourself. Fifteen minutes of fame is a strong lure, but do you really want your friends and family to see you that way? There are lots of teenagers jonesin’ for your cast-offs. Let someone else take care of your stuff the second time around.