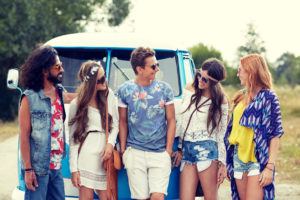 “I think this is the spot where Blue Rainbow had his shack.”

They kicked at a few rotten boards with faded flowers painted on them, overgrown with sorrel and ferns.

“I guess not,” he said, “but Blue had the best view on the commune.”

“Even the view is gone,” she said. “The place is barely recognizable.” She gazed toward a row of spindly pines.

They walked back to the Big House. Until recently, it was occupied by one of their old communard friends. He died a few months back, after a lingering bout of meningitis.

Hearing about his death, the Bobby and Jenean, who had lived together ever since leaving the commune after the FBI raid in 1974, decided to make a day of it, and picnic on the land. The tofu and arugula sandwiches nevertheless left a hollow feeling in their stomachs. The trip had begun to take on the morbid feeling of lingering too long at a funeral. Both of them tried to make light of it, though.

“Betty and Alice’s treehouse was around here somewhere.”

“I think that big Doug fir blew down in a storm.”

The water tank was overflowing with weeds. The Big House belied its own nickname. It was smaller now than the place Bobby and Jenean lived in, alone, back on their quiet cul-de-sac.

There was a circular platform of crumbling boards.

“Aw, he and I had some good times here,” she said.

Bobby turned his gaze on her. “Wait, I thought you couldn’t stand Seth.”

“No, no, you’re thinking of Steve. He I couldn’t stand,” she said. “Seth on the other hand…” Her voice trailed off in winsome memory.

She lingered over her answer. “Well, now I’m not sure. It was a long time ago, after all.”

“Shit,” he said. “Every time we look back on that time, I’m hearing about another of your lovers. I thought I was your only one here.”

“Come on Bobby. It was the times.”

He knew she was right. Still, he thought, Seth? Fucking Seth, too?