According to the Journals of Gerontology: Social Sciences, boomers are demonstrating greater cognitive decline than earlier generations.

For the cognitively impaired, that means we’re looking at early warning signs of dementia. Boomers start having lower cognition scores than earlier generations at age fifty to fifty-four. We know this because the scores from these tests were compared with those from tests taken by people over the age of 50 in past generations.

This has serious implications for our future mental health.

Every two years, study participants filled out surveys. They also completed a battery of cognitive tests in which they were asked to perform such mental tasks as recalling words they had heard previously, counting backwards from 100 by sevens, identifying objects depicted in drawings and naming the president and vice president.

What explains our decline in cognitive function? We eat right, pursued higher degrees, and often have professional careers. The study indicates it may have more to do with loneliness, depression, and psychiatric problems than a deprived childhood. Substance abuse too (think opioids) may be a factor.

In short, a lot of boomers are in lousy physical shape and therefore not in very good cognitive shape.

So it’s time to shape up. Doing nothing will only exacerbate the trend. We need more regular physical activity and pursuit of social relationships. In addition, we need to address underlying mental health issues as well as treat the cardiovascular diseases. For some boomers, even these remedial behavior/health changes may not impede their risk of dementia in years to come.

Oh thank God. I was getting worried. A minute later and I can still repeat those 5 words. I’ve got nothing to worry about.

Unless they give me 5 different words. 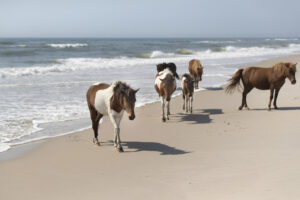 Before knowledge of the deadly pandemic, I gave notice to retire as high school English teacher after 24 years in the classroom. Since the pandemic’s abrupt decision to end that role, I had three months of remote learning experience which helped to seal the deal. June came as I faced quarantine, retirement, limited summer vacation, and sidelined from the revolution I so wanted to join. I honored the quarantine, thankful that I could, knowing that I was entering a nofly summer. I acknowledged my retirement as the new school year approached, wrapped in its remoteness, without me, and ventured out on one last “summer vacation.”

In planning my trip, I noticed this one did not face a deadline, a return to work order, or an itinerary that demanded movement and money. This vacation and I, metamorphosized into an altogether unfamiliar vacationer and her beloved vacation. I did this in the exotic region of Assateague Island on Maryland’s eastern shores and a small enclave beautifully situated on Ayers Creek where things stopped.

The Airbnb upstairs quarters were adorned in expansive curtain free windows, skylights, and floor to ceiling glass doors that led to a balcony overlooking a sprawling lawn reaching out to Ayers Creek. Every morning greeted me with the rising sun. The place was purposeful, minimally dressed, nothing more needed than light. (On the sixth night, a full moon appeared in a ceiling port hole, drenching me in its beam). I was present to receive it. I awoke without an agenda, no itinerary, tour guide, or train to catch. No time to consider. I sat with the binoculars on the balcony, to watch two laughing gulls do just that! Coffee in hand, I was still.

The summer heat engulfed me, the rising sun a threat, the blanket of humidity oppressive. So I waited it out. By late afternoon, I joined a salt marsh paddle, slow and steady, a breeze brewed and carried us to the homes of many birds. In our slowness, we encountered eagles (perched on a branch above my head, sharing in my stillness). The “great blues” appeared at every turn, barely noticing us, others hesitantly, somewhat annoyed. The cormorant classically hanging its wings out to dry, so cool, stopped in all its glory, as natural as its flight. Our guide spotted every little tern, turtle, crab, and reed. Her specialty was finding eagles and their nests, from her winter watch for the Maryland Conservancy eagle count. I had nowhere to go.

Except to Assateague, which is a magical place at any time, but when sitting at its shore, with just two other families more than socially distanced, it is another world. I did not get on a plane to come here and entered with a lifetime senior pass.

A trio of Assateague ponies came prancing down the beach in a frenzy, whinnying and flirting with a welcoming pony from the opposite direction; they greeted in a circle dance, in front of my blanket under the moon. Their show was for me, I was sure of it. The full moon hung over us, as the sun parted. We followed it to the bay side finishing the night with the glorious display of a star just doing its job and loving it!! Taking the time to call it a day.

My time there was not squandered. Many vacations bring the pressure of itinerary and must sees in 36 hours. This one, with COVID as its parent, reminded me to walk slowly, step out of the way, and behind a mask, let my eyes do the work. I am the student now.

“We’ve hit rock bottom,” my wife Anna groaned. “Sitting on the couch watching other couch potatoes on television critiquing reality shows like we do, it’s proof positive we have no life.”

“When did we die?” I played along, but Anna frowned.

“Okay, we breathe, eat and do other things that mirror life but we’re just making a mockery of it. Pass the popcorn,” she groused.

I took a sour bite of reality chewing Anna’s words. I mulled over the touchstones we should’ve heeded as our world shrank: living vicariously through reality stars like the Kardashians, Saturday date nights becoming a toss-up between doing laundry or grocery shopping, the family barbecue three years ago when my father-in-law started making sense. Even the dog stopped chasing balls instead lolling on the couch with us barking at the canine stars of Pitbulls and Parolees.

“How did we fade away, Anna?” I sputtered but my wife, paying rapt attention to our new flat screen TV, silenced me with a finger that zipped both our lips.

Bookended by births and funerals, we first ran circles around our parents then our kids ran circles around us. We became chauffeurs and coaches. We spent Fourth of July on our front lawn gleefully watching our neighbor across the street light off illegal fireworks. Our aging parents sandwiched us as caregivers, and the death of the 9 to 5 job killed any free time and passion to live life on our terms. Ground to a powder, we burrow into the couch to escape reality by watching and parsing reality shows. And now we watch our proxies do it for us.

“Pass the popcorn, Anna,” I shrugged and slipped into my Snuggie.