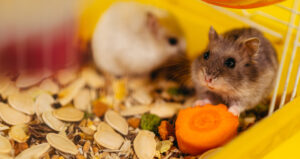 In 1962 a good friend and I decided to team up to both decide upon and then create the required high school science fair project. We decided to test the effect of differing diets on study animals. To conduct the actual experiment we purchased two cute cuddly hamsters and two small cages. They were housed in my dark scary basement where they could be closely observed and monitored during the defined experiment period.

Our plans for the experiment went like this. Hamster number one was fed a balanced diet that contained vegetables and commercially produced pellets made specifically for hamsters. Hamster number two received a mixture of fat, white flour and sugar that had been combined into a pasty unappetizing lump of junk food. He ate his junk food diet with delight but after a few weeks visible changes in his appearance and demeanor were observed. He had put on excess weight; his fur coat was disheveled and he seemed withdrawn and a bit psychotic.

While excitingly reporting the findings to my science fair teammate we together agreed we had a chance at winning the whole shebang. Then a few nights later when our furnace failed to run during a bitterly cold night disaster struck. While shivering I descended the stairs into the very cold basement to feed my little fury friends before departing for school. At first it appeared they were sleeping in but upon a closer inspection I discovered they were dead stiff.

At school, while in a stunned and disoriented state, I informed my teammate that the odds of us taking home the trophy were now about as good as the U.S. landing a man on the moon. He drew a bit of attention when he blurted out, “The hamsters died!”

We quicky accepted reality and consoled ourselves with the fact that they had given up their lives for science and proceeded to tell their story on our science fair story boards. We could not say, “No animals were harmed in this science experiment” nor did we have any results to report due to the untimely death of our study subjects.

We were both sufficiently scarred from this experience that we chose careers unrelated to science and pledged to stay away from a diet consisting of only fat mixed with flour and sugar.

Wait, wait, what are donuts made of?