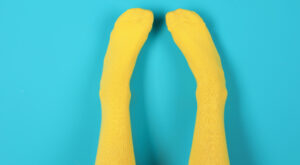 I have a pair of yellow knee socks which have to be over 55 years old. I know this because I would never have worn such footwear with my Catholic Central High School green plaid skirt uniform. When in college at Russell Sage in the late 60’s and early 70’s, I was required to wear nylons like all proper young ladies. I wouldn’t wear yellow cotton stockings with my white nursing uniform. Therefore, I had to get them when I was in grammar school.

My yellow footwear recently developed holes in the heels. You ask the question “So what?” I obviously have gotten my money’s worth out of them. Or at least my father did because he must have paid for them. Well, these knee socks are old friends. They are certainly one of my oldest possessions. I use them all the time, unlike my Nancy Drew books which are probably even older and are housed in a box in the basement. I wear them to bed in the wintertime to keep my feet warm. (This doesn’t say much for my husband.)

The genius, Albert Einstein, hated socks and rarely wore them. He would even attend White House parties sockless. Einstein disliked socks because they were constantly getting holes. His socks were obviously not made by the same manufacturer as my yellow hoisery.

I am trying to decide what to do with the holes before they get much bigger. I once learned how to darn socks. But this was when I was in college and I have never darned a pair since. Should I just sew them up? You probably think I should throw them out.

The reason I am writing about such a mundane article of clothing is that these socks seem to be a metaphor for my life. Like them, I am getting old and I am beginning to fall apart. I have a lot of aches and pains, take nine different medications once or twice a day, get B12 shots monthly and, most significantly, had cancer twice. We are both falling apart.

What should I do with these old friends? Maybe, I will just keep them as they are in my sock drawer but then they would be constant reminders of our aging, lack of usefulness and pending demise.

What would you do? I am open to suggestions.