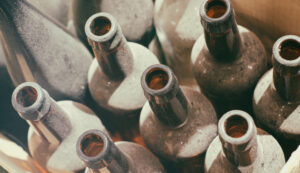 Like other widely obscure writers, I leave scraps–morsels of scribbled thought—everywhere. Most of these droppings end up as trash, or they were garbage to begin with. This habit is never a total waste. Some bits can lead home to a better idea later and might find their way into a song or poem or story. I try to find a purpose for what oozes from my pen. There was a time when my only rationale was “to communicate.”

When I was younger, I would write short poems or notes and leave them hidden somewhere whenever I left a dorm or some rented apartment. This notion—a message to anyone or no one—may have emerged from a romantic view that the world of strangers needed my input. Or maybe it was just some naive belief that I had something to say that was so important that feedback was not necessary.

This practice might have come from an old Ernest Hemingway anecdote I once read about. As a wartime journalist, Hemingway and his mates had come across an enemy shack. Food, supplies, and bottles of wine were left in the hideout, an obvious sign that the enemy was nearby and could be back soon. Not wanting to wait around to engage them, Hemingway uncorked a few wine bottles and happily quenched his thirst. He then urinated into the bottles, topping them up before re-corking them. The bottles of wine would have appeared undisturbed, when they had been disturbed in the worst possible way. The great writer could only imagine the scene of thirsty fascists and their first–and last–swigs. Even when I read the story years ago, the whole episode didn’t sound at all literary, but it seemed very “Hemingway.”

We’re seldom in the room when somebody uncorks our writing. Sometimes we don’t care about such matters when we should. As for my own bits and pieces, I remember where most of my anonymous musings were lodged. I sometimes picture strangers as they unearth these fragments. In my writer’s mind, such scraps emit a glow like some comic book treasure. But there are other pieces I don’t think about–like a poem I wrote on 9-11. Promptly thrown into the sea, I can’t recall even one word of it.

Sometimes we write just because.

Michael Riordan, a retired university professor, has published poetry, short stories and feature articles. He won first prize for nonfiction in spring 2020 ‘ageless authors’ writing contest. his piece, “when our hearts become the sky” can be found at Pleaseseeme.com.