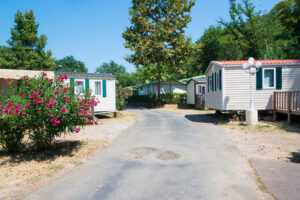 Martin strolled through the resort. They call it a resort he mused, but it’s actually a trailer park…a nice trailer park, for sure, on a canal to the Gulf but, most importantly, it’s a spot under the soothing southern sun after months of snow-blown Michigan. Down to his T-shirt to open his ‘fifth wheel,’ he exulted in the first-of-the-season feeling of indecent exposure from walking around in his underwear—a mobile solar panel soaking up vitamin D and energy. An alligator was doing the same on the boat launch. I can relate, buddy, he thought to himself, as he skirted wide.

“Martin! Hi!” a woman called from a lounger across the broad lawn. Damn, he thought, I can’t remember her name.

“Looks like you just got here,” she called as he approached, “your skin is so white.”

And if you keep baking in the sun your skin’s gonna look like that gator’s, he mulled. Irene. That’s her name. Haven’t thought of her once since last season. Her and her organ recital of health problems. Nobody can top her troubles. But not this time. If she tries to one-up me…

“So how was your fall and winter up North?” she asked as Martin approached.

“Hope it wasn’t as bad as my issues,” she said. Aha, here it comes, he thought. “Last March, just before heading home, I sat on a chair by the pool and one of the legs broke. Next thing I knew I was flat on my back and an Egret was staring me in the face. Needed five stitches on my scalp.”

“Hope you don’t have any ‘egrets’ from the whole thing. Hah!”

Irene gave him stink-eye and announced, “I had to do Physical Therapy and use a walker for two months.”

Okay, top this lady… “Well, how about me. I stepped into a groundhog hole in my garden. Sunk up to my knee. Had to call 911 to get me out. Still can’t walk without a hitch.”

“Oh, yeah? Well I had to have hip replacement,” Irene said as she reached for her cell phone. “Here, let me show you pictures of the x-ray…”

Oh no you don’t, he thought. “Uh-huh, well I had to have prostrate surgery…and it wasn’t the computer kind I can tell you. You should see my scar,” he said as he started unbuckling his pants.
Irene got a funny look on her face before turning her back and mumbling, “Later, Martin.”