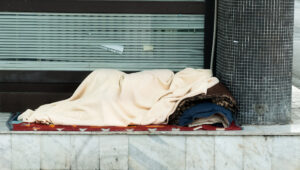 The socks were grey. They had been white, you could see that. Today I saw that they were sports socks, those tube things that are so hard to pull up over freshly showered feet, unless you use a bit of talc.

I’d seen these socks every weekday for I don’t know how long. A couple of months at least, maybe more, I don’t know. I wish I could tell you that I saw them get greyer and the soles get blacker. Can’t, though. I did see them, but only out of the corner of my eye. Just like I looked at the person in them. Until today.

Those once white socks, likely put on without the luxury of a shower let alone a sprinkling of talc, sticking out of a pile of blankets, were just part of the unlovely scenery on my commute to work each day. Litter, sleeping bags, McDonald’s cups, faces, hands – it was one rolling vista of none of my business.

Today the grey socks and the feet inside them were splayed wide as if the owner were sunbathing on a beach. Today people were standing around them. People like me. One of us was greedily telling anyone who slowed down long enough to look, that she was dead. I had never even wondered if there was a he or a she in those socks.

I looked at her home. Plastic bags, some bearing the names of long bankrupt supermarkets, were filled with her life and lined up against the wall. Her thermos flask was standing close by, a packet of cigarettes balanced on the top. No lighter. Her shoes were under her head.

Sirens – time to continue on to work. It really was none of my business. She’d be gone by the time I pass later this afternoon. She’d just be a story to tell by the weekend. Then I saw the Ikea catalogue tucked under her dead arm.