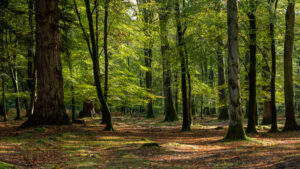 The college town where my husband and I lived was never dark at night. People were always coming and going. When we moved north to New Hampshire, there were adjustments to make. The supermarket was half an hour away. The town had three streetlights, and went quiet after dark.

In time, we found our own fun. The neighborhood families played kick the can until it was too dark to see, and in the winter card games next to the wood cook stove in someone’s kitchen passed snowy nights.

We eventually bought a house where a young forest was all we saw from windows on any side. If a car passed by after nine at night, we sat up and looked at each other. This was what we wanted. But a guest from the college town questioned our choice. Standing at the top of our driveway, she looked around asking, “But, what is it near?”

That was decades ago. When the pandemic shut down life’s usual activities, many people discovered what we already knew. Our home is near a richness of life in its many forms, and we have only to look outside, or walk the trails near the house to appreciate it. In the gardens outside our house, butterflies and hummingbirds enjoy our flowers as much as we do. Flying traffic makes the bird feeder a busy avian airport, and we mark the seasons by the species that flutter in and out. Then there are the chipmunks, who scurry away with dropped seeds and chatter at our cat.

Down the road, geese land in a marsh where they can feed and rest on their migratory journey. They arrive as the dense canopy of oak, birch, poplar and maple leaves turns color and floats earthward. Then the snows arrive. The teeming life so nearby has gone dormant or disappeared underground. Before the snow is deep enough for snowshoes, it reveals the tracks of visitors who don’t want to be seen. Raccoon, fox and deer live not far away. We even hear an occasional owl.

As years accumulate, I know we are closer to the time when the luxury of immersion in a wild environment will no longer be safe or convenient. We can only hope our final home will be near at least a fraction of such a rich, engaging habitat.

Chris Hague’s poems and stories have been published in various literary magazines. She has written an arts column for the Weare Free Press and other weekly newspapers.