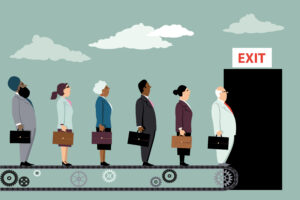 Have you been reading about The Great Resignation? Droves of people are quitting their jobs, much of it as a result of the pandemic. While lots of factors play into their decisions, including child care challenges, it sounds like workers have discovered the joys of a slower pace and aren’t going back until they find something with more balance.

You’ll notice I didn’t say work-life balance. In one job, I wrote talking points for the president of the company about his efforts to change the culture of the workplace. He asked me to “socialize” them with other executives, and one VP took issue with the term work-life balance. He said, and I quote, “Work is life.”

As for resigning, we get it, don’t we? One of the reasons I retired earlyish is because the rat race was wearing me out, too. But I was 62, and my husband and I had enough money saved to presumably last the rest of our lives. These are young people gambling with their futures … holding out until employers bend.

I’ve never understood why 40 hours a week isn’t enough. In my last job, you were expected to put in at least 50, preferably more. My boss had some sort of document readily accessible on her smartphone that could instantly tell her who was putting in the most unpaid overtime … and who wasn’t.

She would check on weekends to see if your Instant Messenger light was green, which usually meant you were online and working.

Granted, I was highly compensated, but my hourly rate was down there with fast food. Not really, but you like to think you’re paid more because you bring extra value, not because you are willing to give up having a life outside of work.

Fast food reminds me of a funny story.

We had just returned from working abroad, and I interviewed for a job at an insurance company in Columbia, S.C. They made an offer, and I countered.

I made more money than that at my last job working in Egypt.

Well, that was overseas. You can’t compare us to overseas.

I made more money than that when I lived in Alabama.

Well, that was aerospace. You can’t compare us to aerospace.

I accepted the job anyway, but when I later told the story to a coworker, he said his response would have been:

I made more money than that when I worked at Captain D’s.

Well, that was fast food. You can’t compare us to fast food.

That story still makes me laugh.

Anyway, I want the workers to find their bliss, but I can’t say I have much hope. I suspect they’ll enjoy some time off, run out of money and once again be at the mercy of the man.

It’s a tough predicament, and I have no love left for what’s become of the workplace, but I have some amazing memories and am still exceedingly grateful for all my experiences.